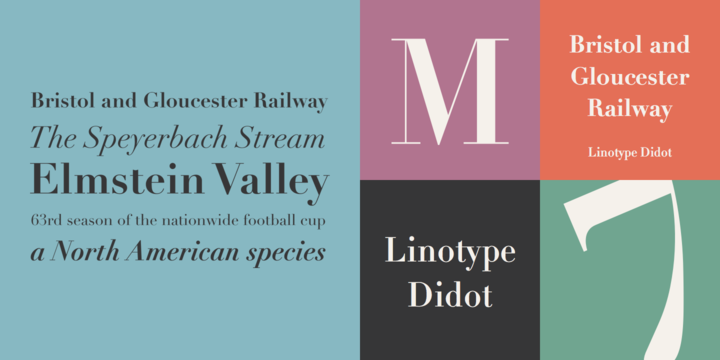 What is the Linotype Didot™ font?

The Didot family were active as designers for about 100 years in the 18th and 19th centuries. They were printers, publishers, typeface designers, inventors and intellectuals. Around 1800 the Didot family owned the most important print shop and font foundry in France. Pierre Didot, the printer, published a document with the typefaces of his brother, Firmin Didot, the typeface designer.

The strong clear forms of this alphabet display objective, rational characteristics and are representative of the time and philosophy of the Enlightenment. Adrian Frutiger’s Didot is a sensitive interpretation of the French Modern Face Didot. Another model for this design is the Henriade, an historical printing of the original Didot from 1818. The font Didot gives text a classic and elegant feel.

Here is a preview of how Linotype Didot™ will look. For more previews using your own text as an example, click here.

Widely used in the mid and late 1700s for text publication, including the publication of Voltaire’s La Henriade in 1818.

Columbia Broadcasting System commissioned the Foundry Didot® font for the creation of its iconic “CBS Eye” logo for the three letters that stand to the side of the eye logo and had the font redesigned by Freeman (Jerry) Craw for the electronic age as a digital CBS Didot DF’ digital font in TrueType in 2009.

When Harpers Bazaar decided to redesign its look, they told Jonathan Hoefler at H&FJ they wanted a modern font with hairline serifs that would maintain them no matter what size the font was. Hoefler studied several specimens of Didot fonts from 1819 publications and designed one that would work for the digital redesign, named H&FJ Didot’.

No. This is a premium font that you can download from MyFonts.com Please don't waste your time looking for a free download of Linotype Didot™ as you just won't find it.

Do the right thing. If you want Linotype Didot™ then click here to visit the download and purchase page on MyFonts to get it with the proper license. The designer and publisher deserves to be paid for their hard work. :)