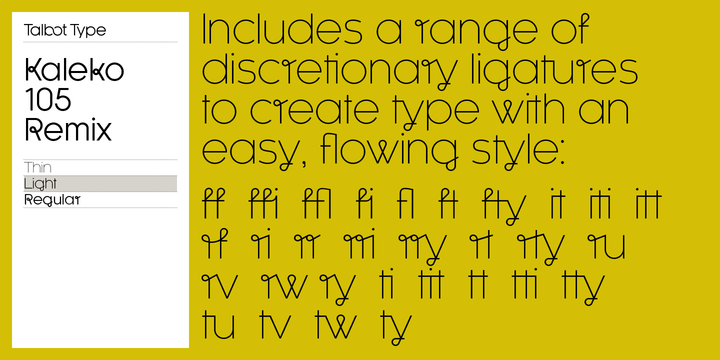 What is the Kaleko 105 Remix font?

A remixed variation, available in three weights, of the popular Talbot Type geometric sans Kaleko 105. The addition of occasional flourishes at the intersections of strokes, in both upper and lower case, adds character charm, making the font a perfect titling font to accompany Kaleko 105, or a display font in its own right. Kaleko 105 Remix features a comprehensive glyph set including accented characters for central European languages.

Here is a preview of how Kaleko 105 Remix will look. For more previews using your own text as an example, click here.

No. This is a premium font that you can download from MyFonts.com Please don't waste your time looking for a free download of Kaleko 105 Remix as you just won't find it.

Do the right thing. If you want Kaleko 105 Remix then click here to visit the download and purchase page on MyFonts to get it with the proper license. The designer and publisher deserves to be paid for their hard work. :)