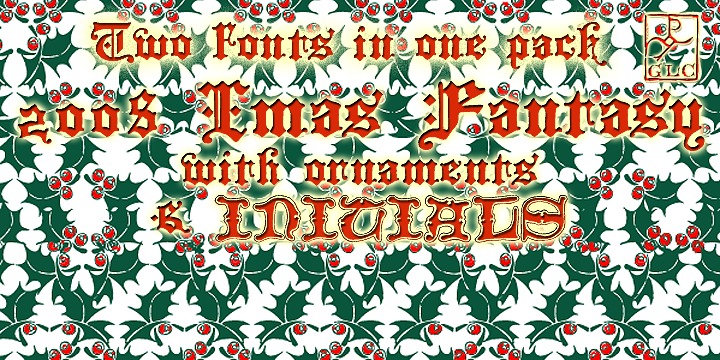 This family is an entirely original creation, drawn in the spirit of ornamental blackletters like those designed by the 19th century. It contains two styles : the first (Normal) of decorated blackletters, upper and lower case, the second (Bold) of two sets of Lombarde capitals, both outlined.
As usual, the discreet irregular charming aspect due to the manual engraving work was preserved.
Added are a few ornaments. More…
The two styles are containing Thorn, Eth, L slash and O slash.
It can be used as variously as web-site titles, posters and flyers design, publishing texts looking like ancient ones, greeting cards, all various sorts of presentations, as a very decorative, elegant and, mostly, a funny pretty font…
This font can be enlarged, possibly strongly, remaining fine, just as easily be legible from 6 points.

Here is a preview of how 2008 Xmas Fantasy will look. For more previews using your own text as an example, click here.

No. This is a premium font that you can download from MyFonts.com Please don't waste your time looking for a free download of 2008 Xmas Fantasy as you just won't find it.

Do the right thing. If you want 2008 Xmas Fantasy then click here to visit the download and purchase page on MyFonts to get it with the proper license. The designer and publisher deserves to be paid for their hard work. :)