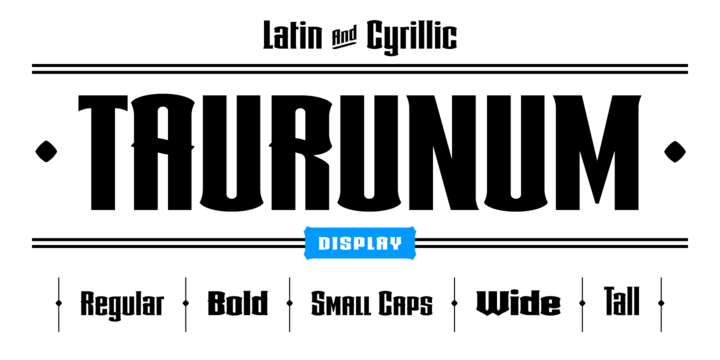 What is the Taurunum font?

The initial idea for this font came when a friend of mine asked me to create a logo for a sports team that he was forming. Since it was a martial arts competitive sport, bold and striking lettering was needed to reflect that. When the logo was finished, I was really pleased whith the letters so I decided to create the entire font.
Taurunum is made with intention to be used for display design (logos, posters, etc.), and combining the weights should give best results.

Here is a preview of how Taurunum will look. For more previews using your own text as an example, click here.

About the designer of Taurunum

Nikola grew up playing and learning in his father’s DTP studio, where he was surrounded by the amazing world of the late 80’s and early 90’s graphic design, a period when technological breakthroughs opened up new possibilities for everyone in the business. Naturally, he became a graphic designer.

He got his master’s degree in graphic design from the Faculty of Applied Arts (University of Arts in Belgrade) in 2002. However, type design was a different story. This peculiar and seemingly uninteresting craft was something he grew to love only when he was in his thirties and years into the business. He had to push himself hard so as to develop the discipline required to master this particular art. By 2016 he has designed more than a dozen typefaces.

Among his most well known typeface designs are Breakers, Argumentum and the awarded Chiavettieri. Once mystified by his father’s craft, Nikola is now his proud partner at Kostić Type Foundry.

Nikola is the creator of the following fonts…

No. This is a premium font that you can download from MyFonts.com Please don't waste your time looking for a free download of Taurunum as you just won't find it.

Do the right thing. If you want Taurunum then click here to visit the download and purchase page on MyFonts to get it with the proper license. The designer and publisher deserves to be paid for their hard work. :)