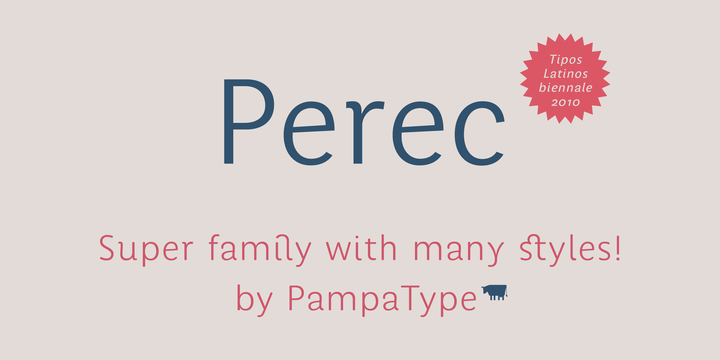 What is the Perec font?

Georges Perec (1936 – 1982). French poet, novelist, scientific documentalist, composer, author of radiophonic pieces, lover of puzzles, film maker, parachutist, player of go, and author of the most difficult crosswords, Georges Perec is one of the most original writers of the literary revitalization of the second half of the 20th century. He was a member of the OuLiPo (Ouvrier de Littérature Potentielle) including people like Raymond Queneau, Harry Matthews, and Italo Calvino, a group that pursued a radical innovation of literature employing imaginative methods based on the idea of constraints. Perec’s œuvre radiates an invigorating ludic sense, and his meticulous tales, acrobatically run across all literary genres and all époques. Among his most celebrated novels there are: Life: A User’s Manual (La Vie mode d’emploi, 1978), A Gallery Portrait (Un cabinet d’amateur, 1979), and A Void (La Disparition, 1969, a lipogram, that is a text written without ever using the letter “e”). More…
The type family Perec pays tribute to the genius of Georges Perec, it is a versatile super family that can be used at a wide range of applications, formed by three subfamilies:
—Perec, a sensitive sanserif grotesque, including 15 fonts: romans, italics, and small caps declined in five weights. With a more delicate spirit than that of a sans grotesque Perec performs well not only in display sizes where elegance and flair are needed, but also in text sizes as its open counters make it comfortably readable. Its smooth color texture and range of weights from SuperBlanca to SuperNegra allow for a pleasant reading experience.
—Perec Ludique, a more relaxed display series, including five fonts:
—Ludique Cubes, a crosswords puzzles font
—Ludique OncleJacques, a tribute to jeweller and pearls dealer Jacques Bienenfeld, great-uncle of Georges who made it possible for his Polish parents settle down in Paris where “Jojo” was born and grew up
—Ludique Pochoir, an unconventional stencil
—Ludique Scripte (not yet released), an informal script which combines nostalgia and gentleness, and that gives you all writing style possibilities: all letters linked, all letters unlinked, and an auto-driven in-between choice. Ludique Scripte includes also many contextual alternates, ending sorts and swashes.
—Perec Lunatique (not yet released), a rounded sanserif subfamily declined in 15 fonts: romans, italics, and small caps for both text & display use, including several non-conventional beautiful ligatures.
All Perec fonts take advantage of OpenType, ligatures, alternate glyphs, three sets of figures (uppercase, lowercase, and small caps case), and more contextual elements. Visit www.PampaType.com for more information on the Perec™ typefaces.

Here is a preview of how Perec will look. For more previews using your own text as an example, click here.

No. This is a premium font that you can download from MyFonts.com Please don't waste your time looking for a free download of Perec as you just won't find it.

Do the right thing. If you want Perec then click here to visit the download and purchase page on MyFonts to get it with the proper license. The designer and publisher deserves to be paid for their hard work. :)