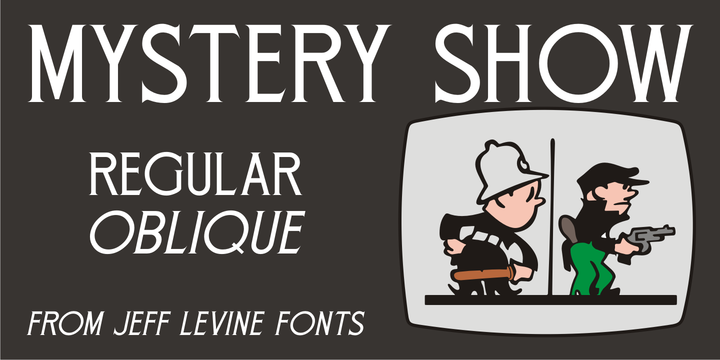 What is the Mystery Show JNL font?

Mystery Show JNL was modeled after the hand lettered titles found on various early episodes of the 1950s TV suspense program “Alfred Hitchcock Presents”.
The design emulates characteristics found in Frederic W. Goudy’s Copperplate Gothic [a sans serif of equal stroke weights with tiny spurs added], but is considered a serif font by the addition of the spurs.
Mystery Show JNL is available in both regular and oblique versions.

Here is a preview of how Mystery Show JNL will look. For more previews using your own text as an example, click here.

No. This is a premium font that you can download from MyFonts.com Please don't waste your time looking for a free download of Mystery Show JNL as you just won't find it.

Do the right thing. If you want Mystery Show JNL then click here to visit the download and purchase page on MyFonts to get it with the proper license. The designer and publisher deserves to be paid for their hard work. :)