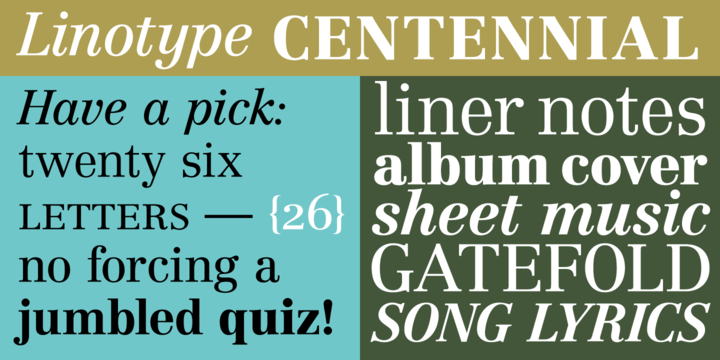 What is the Linotype® Centennial font?

Linotype commissioned Adrian Frutiger to design a special face in celebration of its 100th anniversary in 1986. The resulting serif design is slightly compact, the weight is sturdy with fairly high contrast between thicks and thins. With its clean, unobtrusive appearance, Linotype Centennial is an excellent choice for book and periodical texts, newspapers, magazines, newsletters, and books.

Here is a preview of how Linotype® Centennial will look. For more previews using your own text as an example, click here.

No. This is a premium font that you can download from MyFonts.com Please don't waste your time looking for a free download of Linotype® Centennial as you just won't find it.

Do the right thing. If you want Linotype® Centennial then click here to visit the download and purchase page on MyFonts to get it with the proper license. The designer and publisher deserves to be paid for their hard work. :)