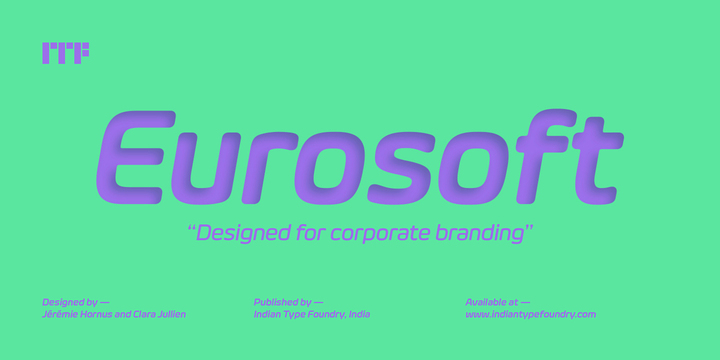 What is the Eurosoft font?

Eurosoft is a friendly rounded sans with 10 styles. It was designed in Paris by Jeremie Hornus and Clara Jullien for ITF. The typeface’s appearance is very technical-looking. Its letterforms are square-like in terms of their forms, despite all of the typeface’s stroke terminals being rounded-off at their edges. The stroke contrast is very low; Eurosoft’s characters appear quite monolinear. The typeface’s letters have been strongly simplified: the lowercase a, g, m, n, r, and u have no spurs, and capital E, F, V, W, Y, and Z all feature rounded corners. Eurosoft’s proportions include short ascenders and descenders, as well as diacritical marks that are almost flat. The Italic fonts are in fact ‘obliques’. Eurosoft works particularly well in corporate identity projects and editorial design.

Here is a preview of how Eurosoft will look. For more previews using your own text as an example, click here.

No. This is a premium font that you can download from MyFonts.com Please don't waste your time looking for a free download of Eurosoft as you just won't find it.

Do the right thing. If you want Eurosoft then click here to visit the download and purchase page on MyFonts to get it with the proper license. The designer and publisher deserves to be paid for their hard work. :)